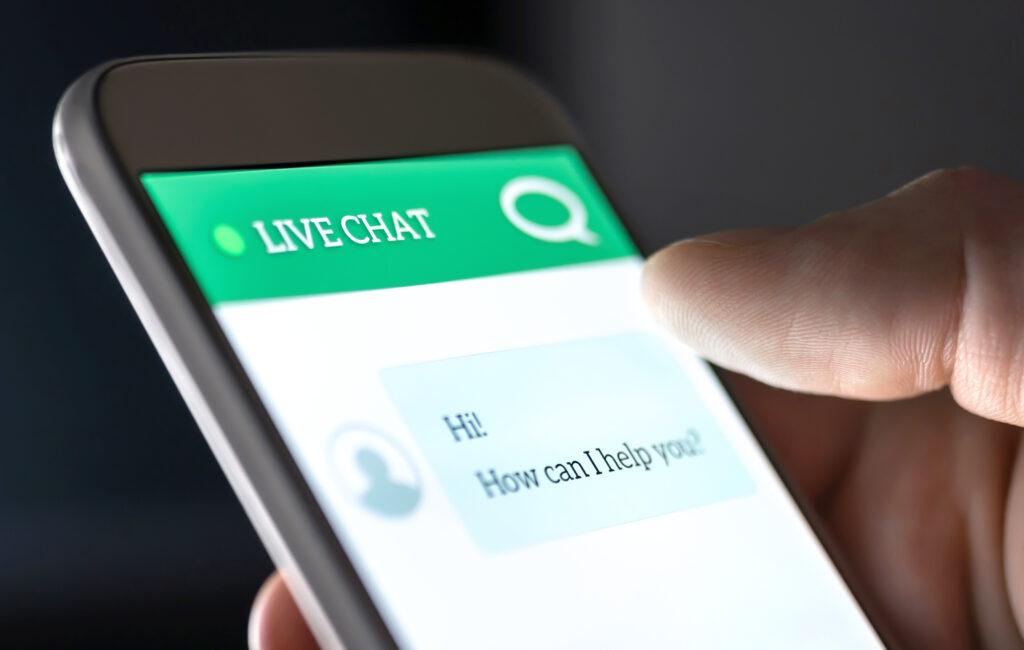 Curious about convo design? Up for a challenge? See how Joel Ramey completed each daily prompt and put your skills to the test!

Like content design and UX writing, conversation design is an exciting and fast-growing field. Unlike content design and UX writing, there aren’t that many resources available to help people learn the craft. Enter Hillary Black, author of our Chatbot Writing & Design course, and Ryan Farrell, creator of the Daily UX Writing Challenge. Thanks to their collaboration, we have a valuable new resource for learning conversation design: the Daily Conversation Design Challenge.

I was the first person to complete this new 14-day email challenge and had a great time! It gave me four very timely learning opportunities:

Having already taken the Chatbot Writing & Design course, I put the skills I learned to the test and am pleased with the solutions I came up with, as well as the various mockups I designed. All were encouragingly reviewed by Hillary and have been added to my portfolio.

Let’s go ahead and take a look at them. Oh, and expect some wordplay and the odd hidden joke (because that’s what I do — I’m sorry, or you’re welcome). 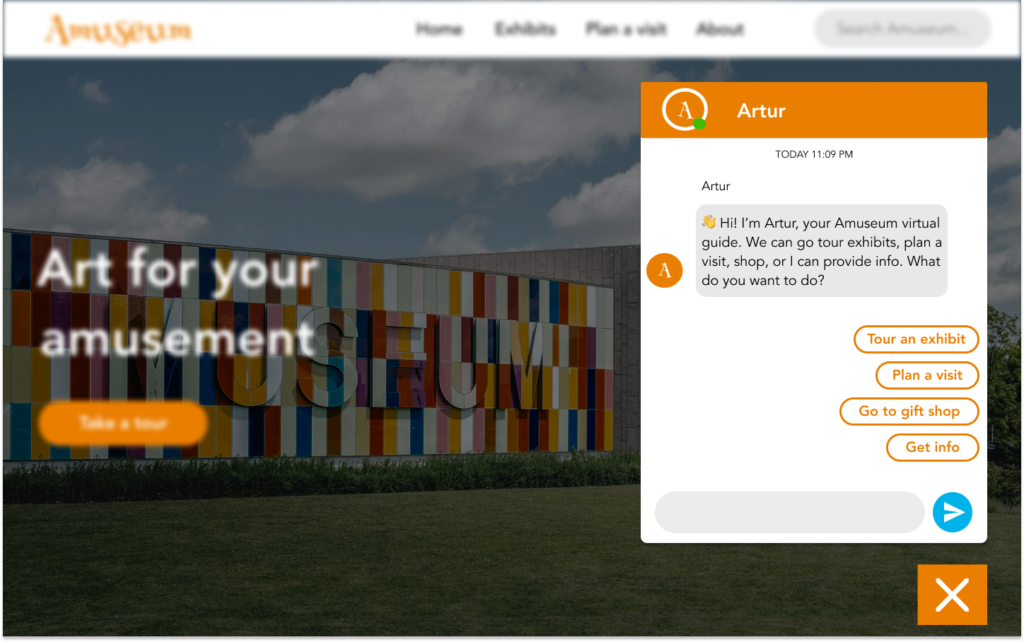 Naturally, a welcome message should be, well, welcoming. It should be warm, friendly, and have a touch of enthusiasm. So that’s what I went for here. I used “we” because a good guide doesn’t leave people to amble around aimlessly; they go with them on the journey, even leading the way. That’s what Artur is supposed to do.

And when a bot is introducing itself, it’s important to reinforce the brand as well as set expectations for the person by telling them what it can help them with. I made sure the quick responses I used were all clear, concise, and consistent with what he said he could do.

I wanted to highlight the value of this new feature for the person, how they’ll benefit personally. I again wanted to sound warm, friendly, and slightly enthusiastic, while giving them a practical incentive to act quickly on what they’ve just found out.

Hillary ideally wanted one message, but since she graciously afforded us two for this challenge, I was happy to use the second to add some personality. 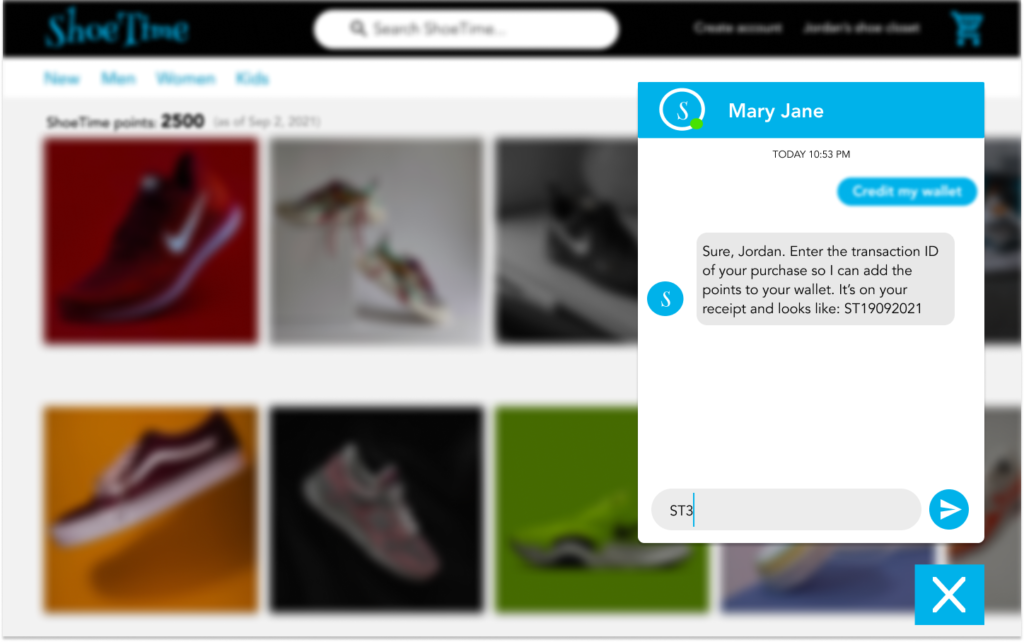 I worked with the thought that there might be some annoyance here, so this was no time to be cute or funny. I wanted to be as clear and direct as possible with my words, and in line with best practices, I gave an example of the input my bot, Mary Jane, was looking for. This will help minimize the chance of Jordan entering the wrong input and the bot running into problems, which would cause further annoyance.

Hillary suggested having the bot show a picture of a receipt with the transaction ID circled. That’s a great idea, and I’ll keep it in mind to use in other situations in the future. 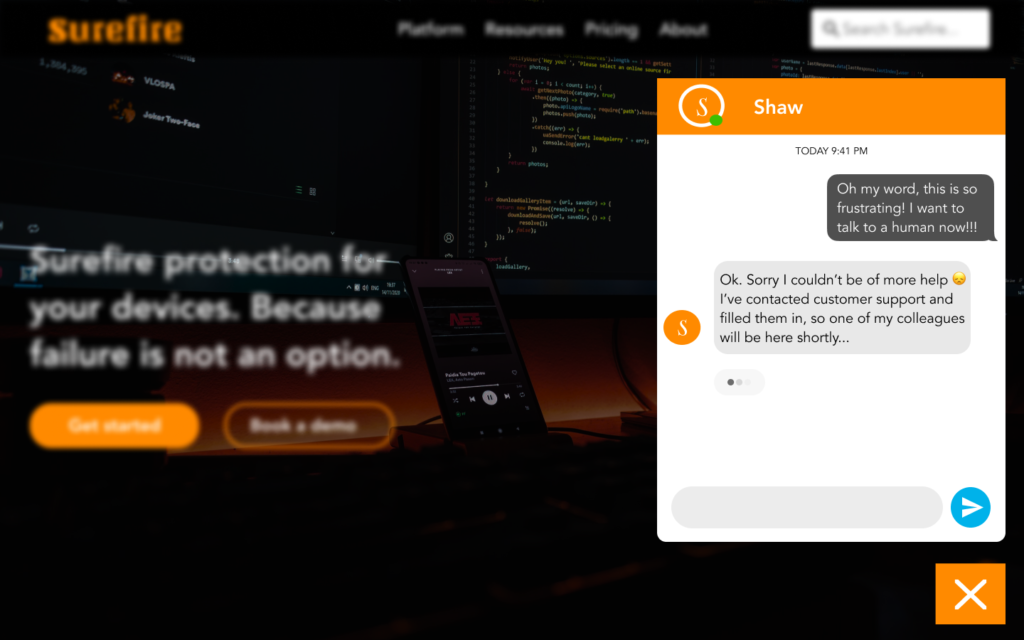 Yikes! This is a high-tension situation that needs to be handled with care, humility, and precision. It’s no laughing matter, and given the person asked to speak with a human “now!!!” I simply wanted the bot to comply “now!!!”

Although there’s always a debate concerning whether or not to say “sorry,” I felt it was appropriate here. Hillary agreed. I added the emoji for a personal touch as well and said “shortly” instead of giving a wait time because I wanted to manage expectations and avoid compounding the person’s frustration further. I just hope the human got there soon enough. 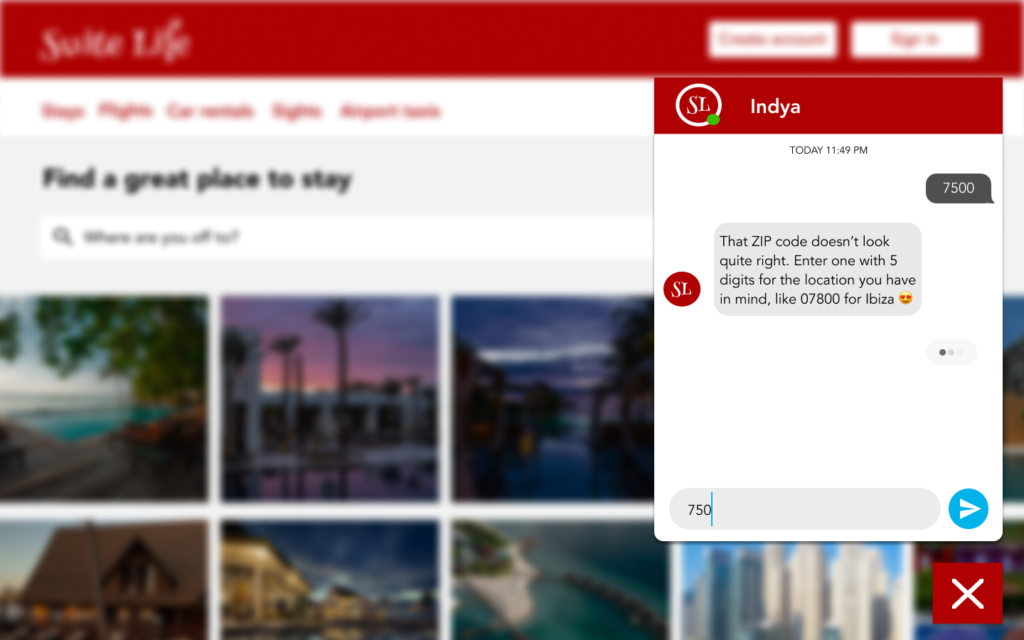 The UX writer in me came out here (throughout the 14-day challenge, actually). I didn’t want to sound harsh or shame the user for making a mistake, so I chose to avoid statements like: “You entered the wrong ZIP code.”

I just wanted to get them back on track, and I added a bit of personality as I gave them an example of the input that was needed. Who doesn’t like Ibiza? 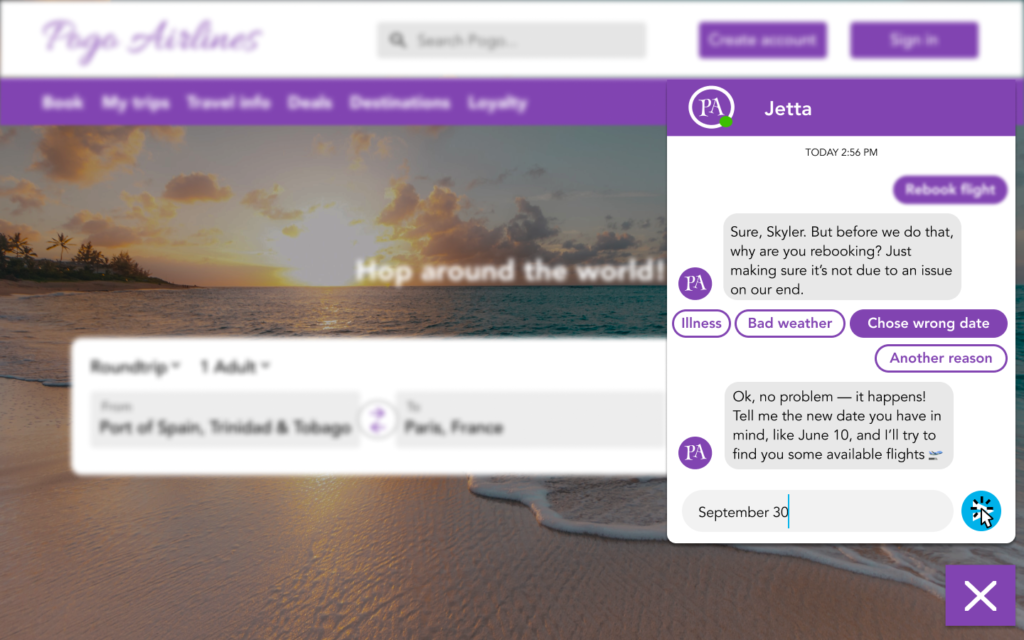 If I were Skyler, I’d be a bit taken aback by the bot asking me why I’m rebooking my flight. ‘How is that the bot’s business?’ So my aim was to have the bot put them at ease by giving the reason behind the question. Then, I wanted the bot to acknowledge the chosen response before moving on to complete the task at hand.

I had Jetta give an example of the input needed to minimize the chances of the wrong input being entered. Ideally, though, I’d have Jetta show a calendar to allow for the selection of new dates from that. Hillary had the same thought.

A person could abandon their cart for any reason, really. That reason could be due to serious financial constraints, or simply a matter of timing (they’re not ready yet and are saving it for later). Whatever their reason, it’s neither the company nor the bot’s business.

I wanted to make sure my copy didn’t come across as either nosy or judgmental. I wanted to sound warm, friendly, and encouraging. I also wanted to give them an incentive to complete their purchase as soon as they can.

After reading the message, Hillary said she wanted to buy. The “no code necessary” addition is actually her idea. It breaks the character limit, but she was fine with that for the sake of creativity. That’s what we’re talking ‘bout!

By now, you’ve probably realized that if I see an opportunity to add some personality to my copy, I’ll snatch it (under the right circumstances, of course). The “Beep Beep” was fitting, I felt, and Hillary thought the emoji was a nice touch as well.

As for the core message, I wanted to highlight the value of subscribing to the text messages for the customer as well as give them an incentive to do so — all while complying with the double-opt-in law. And yes, for the mockup, we went all dark mode just to shake things up. 😎 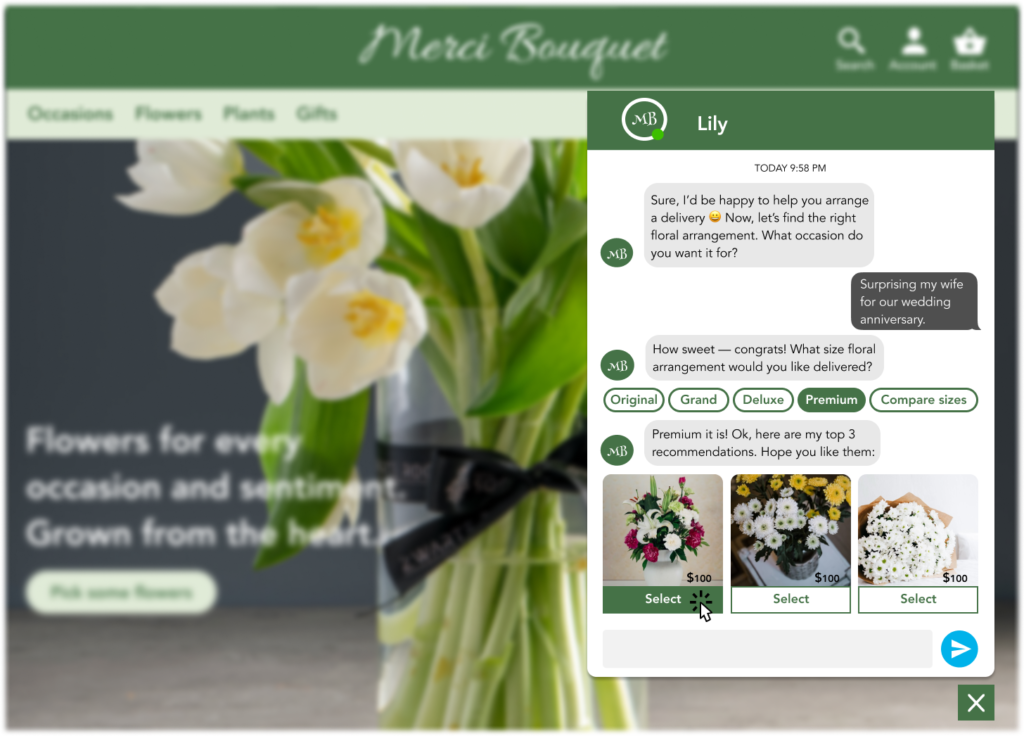 I didn’t know that much about the flower industry, so I did a little research for proper context. I wanted the bot to be friendly and warm in getting the info necessary for making appropriate recommendations, but not too nosy or presumptuous.

For input options, I used both open text and quick responses as it felt appropriate to do so here. For the sizes, Hillary suggested adding a way to help the person better understand how big or small each arrangement is, so I added the “Compare sizes” option to take care of that.

I was also thinking, what if the person doesn’t like the recommendations the bot, Lily, made? In that case, I’d have her give the person the option of seeing more floral arrangements in a carousel.

I had to do some research here, as I’d never written for voice or used a smart speaker before. In the end, I wanted to have Alexa acknowledge the command given and assure the person it was being carried out.

In using Botsociety, I played around with the various voice features (pitch, emphasis, and so on) to get Alexa to sound as human as possible. I also took the opportunity to add some personality to this interaction with the “Watch your step!” bit. And the UX writer in me preferred the informal “start” instead of the more technical “initiate.”

Person says: “Hey, Alexa, can you tell me when my iPhone 13 Pro and iPad Mini will get here?”
​
Alexa says: “Sure, I just need your order info. Sign in to your account in the Alexa app, and turn order notifications on. I’ll wait…”

*pause 6 seconds*
​
Alexa says: “Thanks, I have the info for all your orders now. Your iPhone 13 Pro and iPad Mini just arrived at your skybox for processing.”

I did some more research here, as I’d never designed for a multimodal experience either. In the end, I wanted Alexa to avoid shaming the person for not setting up the feature before and kindly tell them what she needed so she could do what they asked. I also wanted her to give simple, clear instructions to guide them toward fixing the problem.

In the second message, I wanted her to assure them they were successful in doing so and to give them the order tracking info they asked for at the outset. I again played around with the various voice features to get Alexa to sound as human as possible.

People like being the first to get their hands on new things and the latest news, so I focused on that when highlighting the value of subscribing to the company’s messages. I also offered an immediate incentive to encourage the person to do so.

I initially had “type” instead of “reply,” but changed it after feeling immense regret. Hillary was on the same page, confirming that the latter is more widely accepted.

It just makes more sense too, as merely typing the prompt doesn’t trigger the starting or stopping of the messages. For the action to be triggered, what’s typed needs to be sent as a reply. 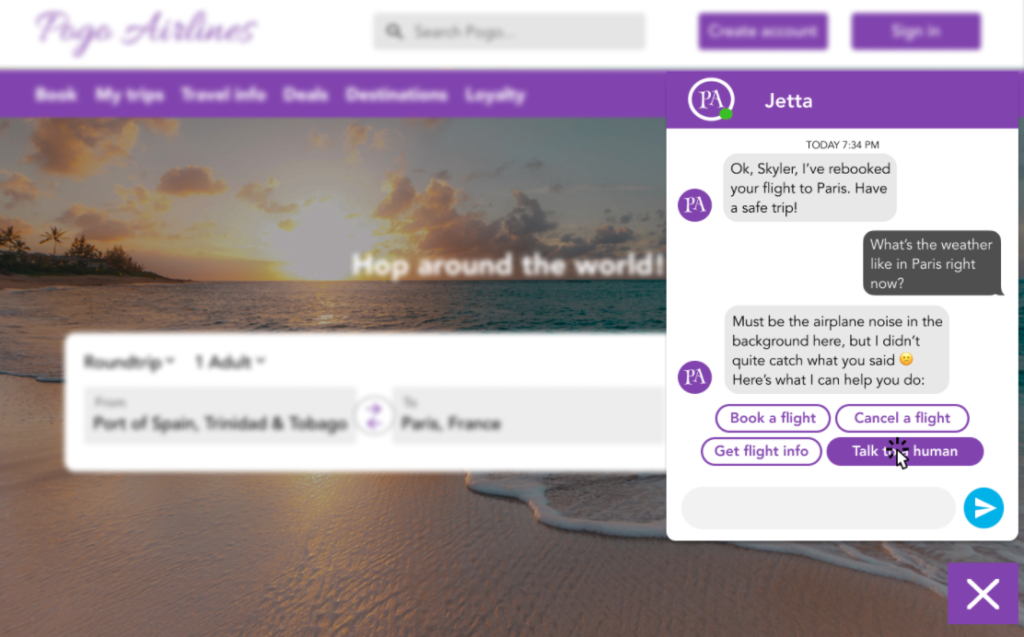 My aim here was to come up with a friendly and helpful message that could suitably handle various situations where Jetta can’t understand something the person said.

I wanted the message to be able to get the person back on track without causing them frustration. I saw this as a level one situation, not too serious, so I took the opportunity to use a little humor.

Hillary suggested a slight change in the wording to make the person a little clearer on exactly what the bot can help them do. I initially had: “What would you like to do?”

Doug says: “Hey, Alexa, set a to-do for me: I need to take the chicken out the freezer for dinner later.”

Alexa says: “Ok, Doug, I’ve set your to-do to take the chicken out the freezer for dinner later. What time should I remind you to do that?”

My aim here was to firstly assure the person that their to-do was recorded. The fact that it was repeated to them should put them at ease. To make sure their to-dos actually get done, I wanted Alexa to be clear and direct in asking them for a specific time to give a reminder. “Later” could be any time, so I wanted to be specific to avoid confusion and resulting frustration if the reminder came too much “later.”

I again played around with the various voice features to make sure Alexa sounded as human as possible.

Joel is a UX Writer and Conversation Designer. Connect with him on LinkedIn.

What will you come up with? Sign up for the Daily Convo Design Challenge! You can keep the learning going with our Chatbot Writing & Design online certification course.

UX writing resources for you! 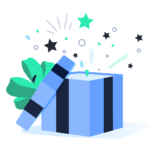