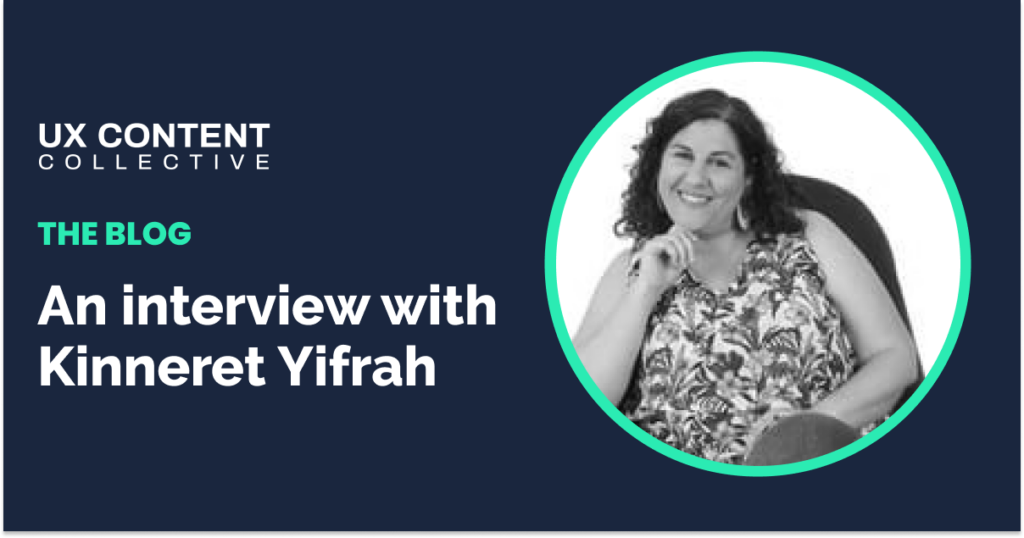 In this interview, the author of the popular book "Microcopy, The Complete Guide" talks about her beginnings in UX writing, her projects, and the future of content design.

In this interview, the author of the popular book “Microcopy, The Complete Guide” talks about her beginnings in UX writing, her projects, and the future of content design. Translated in English and Spanish.

Could you tell me a little bit more about yourself?  How did you start in the world of UX writing and microcopy?

Looking back, it’s almost like it was meant to be. I love writing, and people, and tech, so this profession had my name all over it. But I stumbled on it kind of by accident.

I began my career as an editor of a printed travel magazine back in 2004, and a few years later I became a freelance writer.  One day, while working with the largest bank in Israel on making their emails a bit friendlier, they asked my help in rewriting their budgeting app.  Of course, at the time, UX writing wasn’t a thing. I didn’t know anything about writing for apps. But they insisted, so I worked hard on getting it right, and the rest is history – I fell in love with this content-tech-users triangle. I specialized in it ever since.

Today I lead the Israeli UX writing community, and my true passion is public services and government institutions, where microcopy can genuinely improve lives on a national scale. In 2020, I designed the Israeli government’s voice, and I have been writing microcopy for the government’s digital products since.

Well, the answer is a bit less poetic than one would expect: it was all a matter of timing. I wrote and published my book a bit before the term UX writing was even invented. Microcopy was coined in 2009, while UX writing became a popular term around 2016 when the first edition of the book was hot off the press.

Currently, there’s a real distinction (and a lively debate) in the UX Writing community about the differences between microcopy and UX writing (and content design) – the latter being the profession and the former being the actual words in digital products (also sometimes called UI copy). The book is a mix of both – it has an abundance of microcopy examples side by side with many UX writing concepts and techniques (like research and testing). The publishers who translated the book into German, French, and Japanese actually added the term UX Writing in the title, right next to Microcopy.

I have to admit that I’m a bit impartial about the ongoing debate around the title of our profession or what’s “the right way” to call the words in digital products. As long as we continue conducting research and paying attention to what users need and want and how to help them, all definitions are fine by me. I am excited, however, that our industry and community keep evolving and shaping a unique identity. Seeking clearer definitions is a part of that.

Anyway, I’m happy with microcopy or UX writing or content design, but the book became a bestseller with its ‘microcopy’ headline so it’s a bit challenging to switch at this point. I’m also very proud of those little words, the microcopy, and the book first and foremost focuses on them—they are the final outcome of our work as content designers.

How can a UX writer get the best possible microcopy?

There are 5 elements that make up great microcopy: involvement, user research, brand/product research, understanding the flow, and usability testing. The overall approach comes down to really understanding the why behind each and every step and decision.

So my first tip is to get involved early on in the process. If we’ll understand the rationale behind the choices that the product and design teams made, and if possible—add our own input and insights, we can be in a much better position to make sure our microcopy fits users and the product/brand/ company.

Then, of course, conduct user research. There’s plenty of places where you can really hear and read what users want and need and how they talk about it. I’ve covered it in the book as well (part 1 is dedicated to research). Learn what users want, what keeps them up at night, what they fear, what they dream of, and what words they use to describe all of the above. That’s the basis.

Another important element is brand and product research. Learn about the company’s vision, values, differentiation, business goals, and KPIs. When possible, collaborate with the marketing team, because in many cases they’ve already conducted research themselves. Collaborating with the marketing team also helps to make sure every department speaks and writes similarly, so users will experience the same messaging and user journey across platforms.

Once the product’s mockup/wireframe is done, sit down with the product design team and really understand how the flow looks like, and why. Discuss use cases, check out every version of a screen, understand the product’s behavior, and what is expected of users.

Finally, after writing, conduct usability testing with real users. This is incredibly impactful and has always improved my microcopy. There’s nothing like seeing and understanding how users actually use the product, what they understand, what works, and what doesn’t.

And regarding your book, which I understand is a worldwide success, do you plan to publish another one? Maybe something related to UX writing or content design?

Thank you, it has indeed been an overwhelming and wonderful experience to see the book take off like that. By now it’s been published in Hebrew, English, French, German, Korean, Japanese, and soon Italian. So exciting. As for a new book, well, confidentially, between you and me, I am planning to write a new book! It covers a topic that’s really up and coming in our industry and community, but hasn’t been properly addressed yet. I can’t reveal more at this point, but it’s an exciting project. I hope my schedule will allow me to make some progress in 2022.

I see that there are several well-known UX writers in Israel. Is the UX writing community big there?

Yes! It’s a vibrant, warm, and professional community with 17,000 members. We started off back in June 2015 as one of the first UX writing communities in the world (if not the first), so it makes sense that our community has taken such a prominent position globally. Israel is bursting with technology, so there was a real thirst in the Israeli market for the professionalization of UX writing.

I would like to say that we always welcomed the entire array of digital experts in our community, not just writers, for example, UX/UI designers, product managers, UX researchers, marketing teams, and of course writers of all kinds. This combination of people with diverse viewpoints who all work on digital products made our community a success.

We all learn from each other, and slowly but surely UX writers have become a real asset in the eyes of everyone who works on digital interfaces in Israel. It’s one of the reasons this profession took off in Israel. Our community professionalized the field and showed the value of microcopy to the whole tech ecosystem.

How do you see the future of UX writers and content designers worldwide? How could this role evolve over the years?

I see three upcoming developments that correlate to what’s happening in the tech ecosystem these days: AI (GPT-3 and GPT-4), voice and chatbots (conversation design), and the persistence of microcopy that really needs a human touch.

Writing with the help of AI has very interesting possibilities, especially with the latest development in GPT-3 (which is a language model that uses deep learning to create texts). It will take time for AI to become a good microcopy writer, but I believe that will happen eventually. It could then mean that some UX writers will need to manage GPT/AI models, edit AI-microcopy and refine it.

In terms of conversation design, we see more and more interfaces that will either use voice (like in autonomous vehicles and smart speakers) or automated chatbot functions. They may eventually be written by AI as well, but it’s important to begin specializing in what it means to write great chatbot flows. VUI writers will become more and more popular, as well. They’re already at the core of one of the most cutting-edge fields in tech.

And lastly, with all due respect to AI, we are far from mimicking human emotion. AI is far from fully understanding the emotional, cultural, and social aspects of how different users view the world. We’ll always need a human component in UX writing, at some level, for some products.

What it means to the role of UX writers is two things: first, we will have to get comfortable with sophisticated technology, fast. But in addition, there will always be work that cannot be handled by AI solutions alone, so we should always keep developing our most valuable asset—our humanity. Human empathy and creativity will always have a place in every profession.

Finally, could you tell me a little bit about The UX Writing Library, which is actually a great resource for everyone?

The UX Writing Library contains lots of resources, like links to local UX writing communities around the world, books, newsletters, podcasts, courses, events, “first steps” resources, inspiration, tools, and much more. There are also resources in other languages besides English, and it’s a live document that keeps growing and updating.

It started when people began reaching out to me and asking for advice. Aspiring UX writers were eager to get their first job and learn everything they could, senior writers wanted to improve their skills, and anyone in between wanted to join local communities and keep up to date with the latest and greatest trends. At a certain point, I realized that I keep answering the same questions, so it only made sense to curate all the amazing resources I see online into a big UX Writing Library.

Eventually, my goal is to help aspiring UX writers around the globe join this booming profession, and help all writers create digital products that people LOVE. This is my way to help develop the profession. Some people say that the library was the reason they got their first UX Writing job, which is incredible.

Could you tell me or recommend…

… a UX writing book? Maybe one besides your excellent book?

I LOVE Torrey Podmajersky’s book: Strategic Writing for UX. It gives a broad perspective with just the right amount of detail, yet it’s super practical and concise. It embodies the essence of microcopy. It walks the talk!

The Career Course from the UX Content Collective. It’s a great resource that shows UX writers how to enter the UX writing world and become irresistible for employers.

Of course, I’m biased, but I truly recommend my own writing course, The Microcopy Course, that’s also offered by the UX Content Collective. It’s a step-by-step guide, taking students from the basics of UX writing to sophisticated techniques and live examples of the most important microcopy messages.

I personally really like two digital products that have great UX writing: Lemonade and Wix. Both of these companies took very complex, elitist, and guarded fields (insurance and website development) and made them so delightfully accessible and simple for all of us. The cool part about both is that this simplicity in their writing is also at the core of their business model. You can see how the microcopy is a perfect representation of brand values—simplify the complex and make the user experience smooth, pleasant, and clear. They really practice what they preach.

This interview was originally published on Escontent.