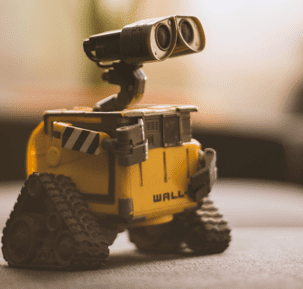 GPT-3 is coming. Are you ready for AI?

UX writers and content strategists need to start preparing for GPT-3 - and we can do that by articulating the value we provide now.

The tech industry (or at least, the people on Twitter) got a bit excited this week when OpenAI released its GPT-3 text-generation tool for public use. The results were exhilarating, scary, and concerning all at once.

They also brought a specific truth to light: UX writers and content strategists must adapt now before businesses start believing they can use AI to replace them.

The question is, how do we do that? That’s what I want this post to explore: how the tools and strategies we use may not make us AI-proof, but at least AI-resistant.

GPT-3 is a text generation tool. Produced by OpenAI, the tool was released in API format this month and the experiments slowly started trickling in.

Basically, the way it works is this: you give GPT-3 a prompt in text. It could be anything, like, “A blog post about cats.” GPT-3 takes that prompt, generates a bunch of text, and then produces an output.

For a slightly more technical explanation, GPT-3 is a language model. It basically takes a huge range of text inputs (including sources like Wikipedia), and then uses them to create new text. The difference with GPT-3 is that it has a huge number of references. Like, 175 billion references.

Which means it can create text from only the most basic prompts.

Just check out what GPT-3 has been able to do:

Designer Jonathan Lee even wrote a piece about how GPT-3, as part of a Figma plugin, created a functional design prototype from raw text.

Of course, artificial intelligence carries the sins of those who program it. In this case, GPT-3 creates text by referencing a huge library of existing text, and in many cases that existing text is incredibly racist, sexist, and homophobic.

Smarter people than me have pointed out that when prompted to write about topics like “women”, the GPT-3 algorithm produces some pretty horrific stuff. The researchers themselves acknowledge this:

It’s also very much worth pointing out that one of the main figures behind GPT-3, Sam Altman, thinks much of the reaction in the last few days needs to, you know, calm down.

The GPT-3 hype is way too much. It’s impressive (thanks for the nice compliments!) but it still has serious weaknesses and sometimes makes very silly mistakes. AI is going to change the world, but GPT-3 is just a very early glimpse. We have a lot still to figure out.

Why is AI important for UX writers and content strategists?

Okay, so that brings us to UX writers and content strategists. Why should we care about GPT-3 right now? And even if it does matter, what can we do about it?

Firstly, we should care because some businesses will inevitably try to use AI tools like GPT-3 to make their UX writing and content strategy teams redundant.

I know this because it’s already happening.

At one major software company, I know for a fact that the majority of the in-product writing team was made redundant. The remaining writers have been tasked with coming up with a language bank for designers to draw from.

Those writers are no longer in charge of in-product terminology.

This is a huge company, and if they have already done it, a tool like GPT-3 will only rationalize that decision more for others to follow.

Of course, we know that would be a bad decision because the strength of UX writing and content strategy goes far beyond the simple text outputs we provide. Which means that if we want to get ahead of GPT-3, we need to start doing a better job at proving the value we create.

I should make it clear that I don’t believe AI is going to displace our jobs any time soon. And, as smarter people than myself have pointed out, the problematic nature of GPT-3 means our jobs should act as a guardrail against this type of AI revolution. I also think the weight of this responsibility falls on white writers and content strategists to point out the ways in which this technology can harm people of color and other underrepresented people in technology companies and communities.

GPT-3 keeps spewing out the most predictably racist, sexist, anti Semitic and homophobic language when prompted on basic words like “woman” and “black” so…I think we should be ok with our jobs for a while.

How can we advocate for ourselves?

For so long, UX writers and content strategists have struggled to articulate or display the value we provide. Unfortunately, I feel the deadline on that work is getting shorter.

The problem isn’t that we’re not doing important work. The problem is that we aren’t showcasing our successes and importance as much as we should.

To paint this in a realistic picture, let’s take two people: Michael and Sarah.

Michael is a UX writer who works across a few different product teams. He gets on well with his colleagues, but unfortunately, they don’t really understand much of his content design process. He’s often brought in late on meetings, told to fix up text at the last minute, and is generally referred to as “the copy guy”.

He’s brought in whenever things “need a polish”, and designers often forget to include him in the process. Text is inconsistent, and many in the organization don’t understand what he does. Michael doesn’t keep track of the impact his text has on users’ behaviour, and as a result he’s vastly overworked and undervalued.

Sarah is a content strategist who also works across a few different product teams. She’s treated as a full member of the design team, and is part of a design process from beginning to end. She attends UX research sessions. She takes notes, and works with the researchers to understand how products should be designed.

Ultimately, she’s able to roughly show how much impact her work has had on the product, and even how much revenue her content strategy proposals bring to the business.

Which of these two are going to be more susceptible to an AI-based writing tool?

Oh, and by the way, her colleagues are more likely to advocate for her as a result.

It will ultimately be up to Sarah to show the business why a tool like GPT-3 has its drawbacks— including, as Laurah pointed out, that such a tool can be critically flawed and even damaging. Sarah is more likely to find success when she positions herself as a necessary guardrail against an AI tool that doesn’t actually know what it’s writing.

How can UX writers and content strategists prepare for GPT-3?

Ready to study up? Read more about GPT-3 here:

AI is cool, but it’s a tool

As OpenAI admits itself – GPT-3 is fascinating, but it’s flawed, (even racist), and a long way off. In the meantime, let’s continue doing the good work in making ourselves seen in our organizations so that when GPT-3 does change the world, we can proactively use it to forge our own agenda – not be at the whim of someone else’s.